The city of Laodicea is located in the Lycus river valley in modern day Turkey (see map below). This city held a church which was being "pastored" by John from his home base in Ephesus.

Laodicea is bracketed by two other cities found in the New Testament.  Colossea to the south-east and Hierapolis to the north.

Paul, writing his letter to the Colossians, tells them to share that letter with the church at Laodicea (Col. 4:16).

Paul also wants the Colossians to read the letter he wrote to the church at Laodicea (Col. 4:16). So Paul, wrote a letter to Laodicea that unfortunately was not kept.

The main point though, these churches are connected by their shared proximity.

Question:  Why does John write, "I know your deeds, that you are neither cold nor hot. I wish you were either one or the other! So because you are lukewarm - neither hot nor cold - I am about to spit you out of my mouth." 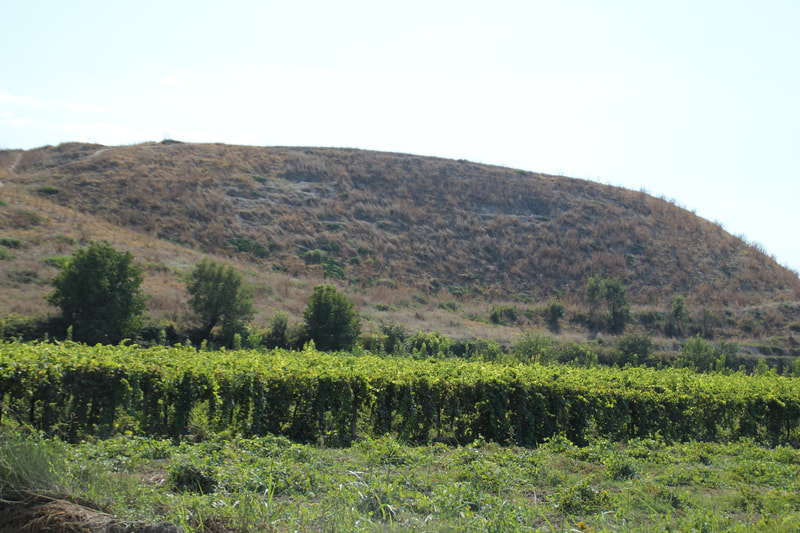 The tel at Colossea. It has never been excavated. 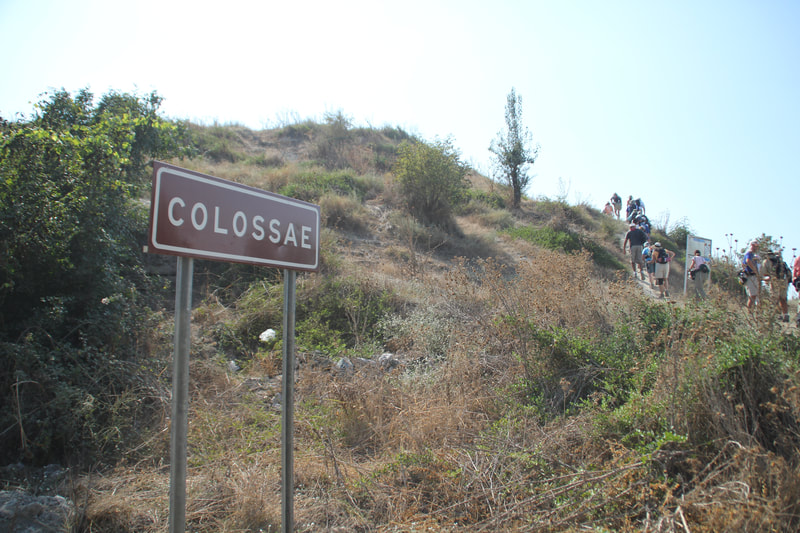 The sign for Colossae and the path to climb to the top of the tel. 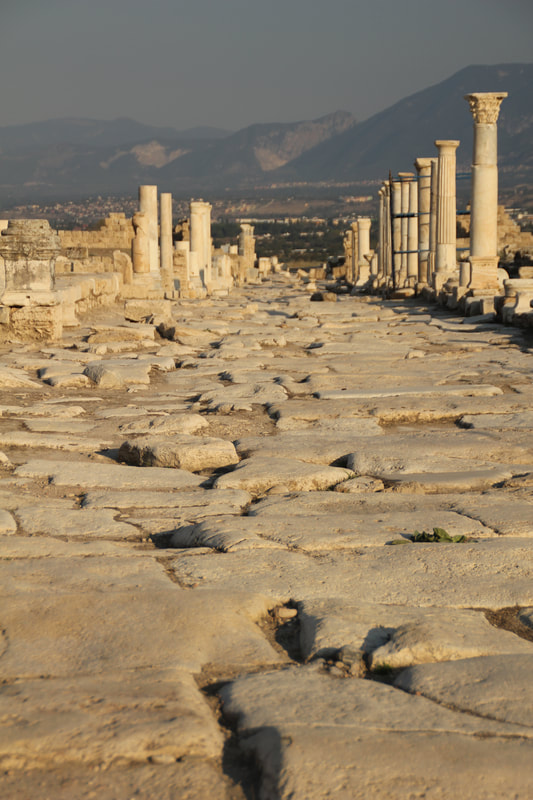 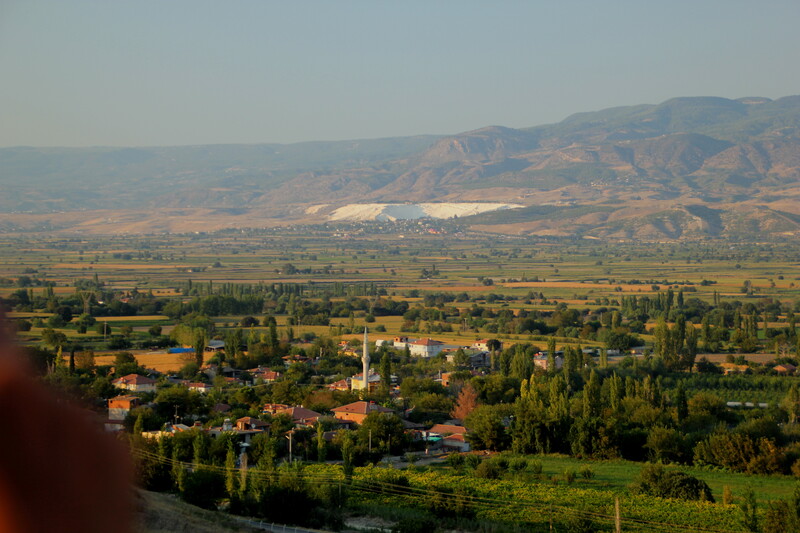 Looking from Laodicea across the valley to Hierapolis. The white on the hillside is Hierapolis which is famous for its hot mineral baths. 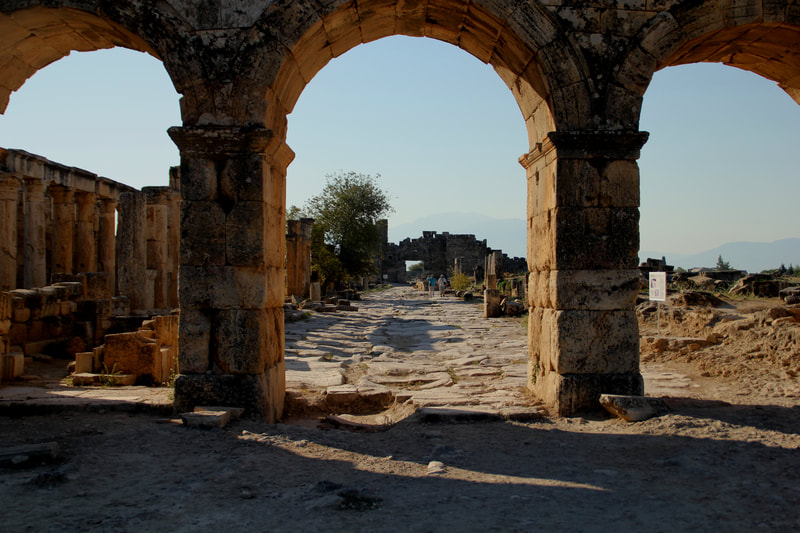 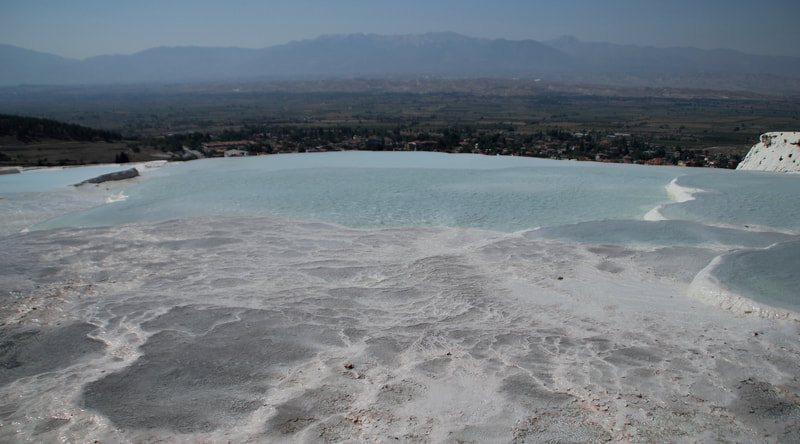 Hot mineral baths of Hierapolis.
Colossea sits closer to the foothills of mountains which are regularly snow-covered in the winter.

The area around Colossea is marked by creeks of fresh mountain spring water running off from the snow-melt.

In the photo below, you can see the mountain peaks in the background as we are walking up to the ancient site of Colossea. A creek of fresh cold water was running just to our right as we walked on this road.

The fresh cold water is good. 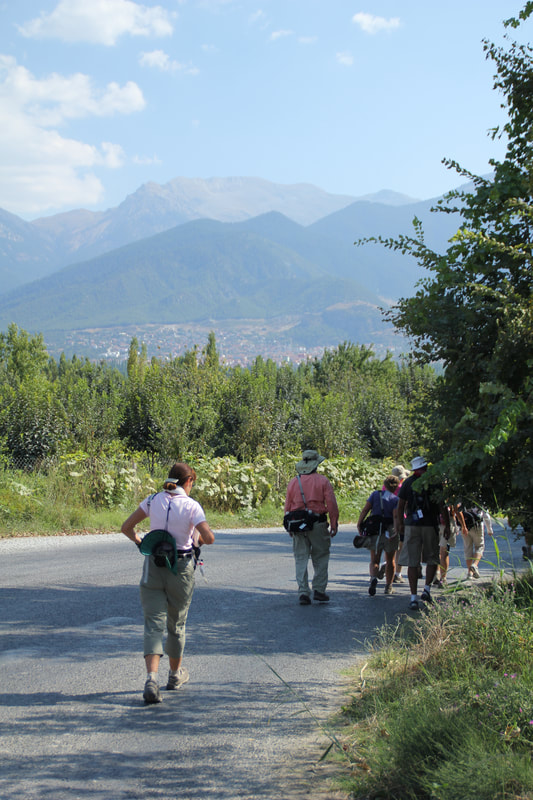 Snow covered mountains feed the Lycus river valley below. Colossea sits on the route of the fresh cold water.
Hieropolis, to the north of Laodicea, was and still is, famous for the hot mineral springs which emerge from the hillside. The modern day city is Pamukkale and is full of tourists swimming and relaxing in the spa like water. You can view the tourism guide here.

​Paul, writing to the Colossians and speaking of Epaphras, says "I vouch for him that he is working hard for you and for those at Laodicea and Hieropolis"  (Col. 4:13).

The hot baths were very popular in Paul and John's day for soothing sore muscles. The Roman soldiers regularly took their leave to relax in this city.

The hot water is good. 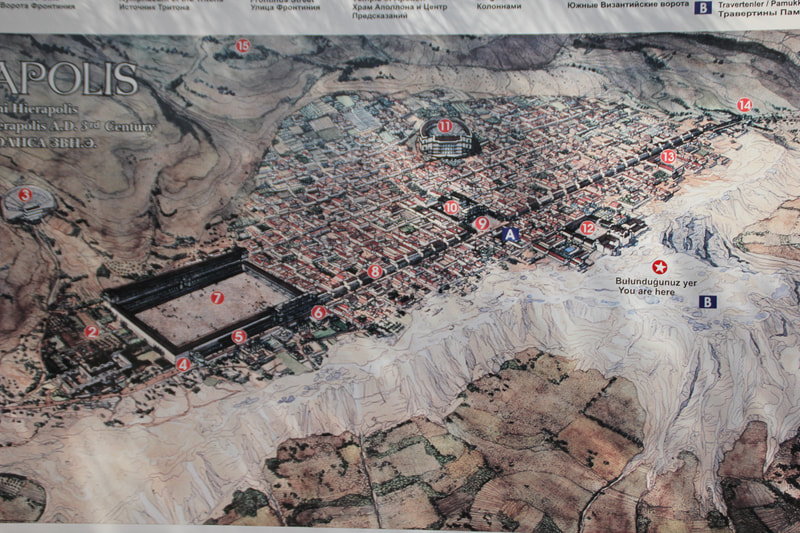 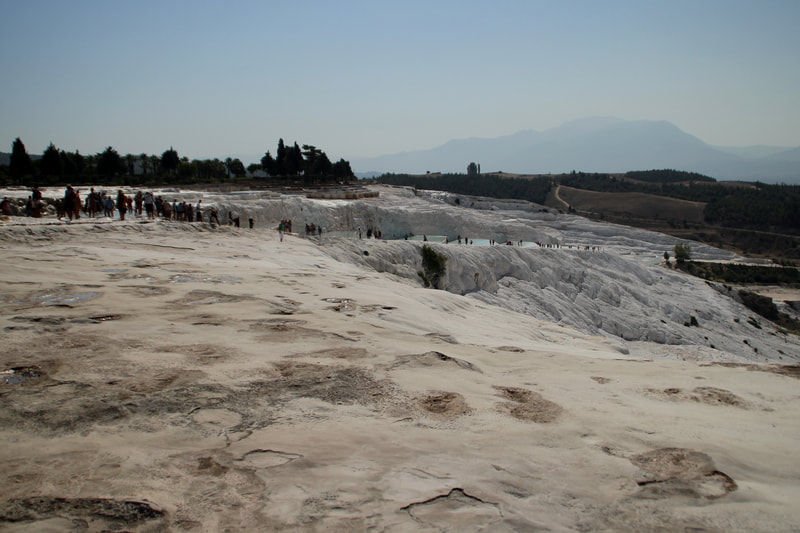 Mineral deposits from the waters that spring from the side of the hill. 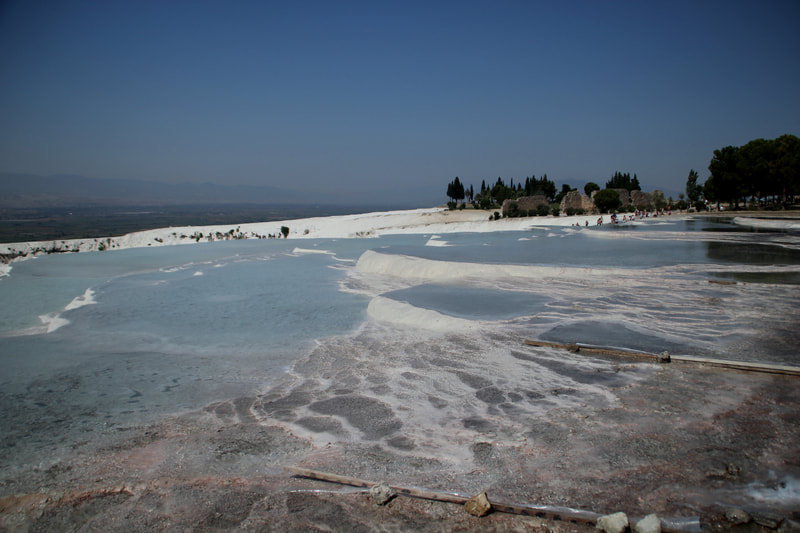 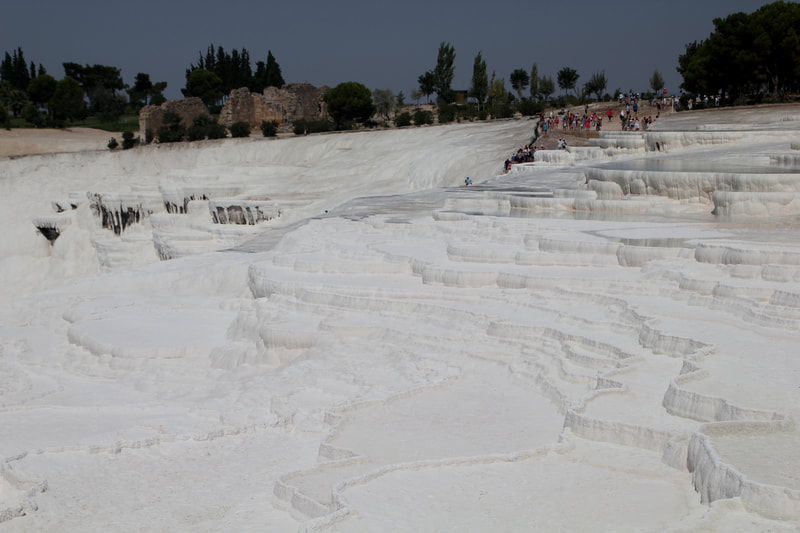 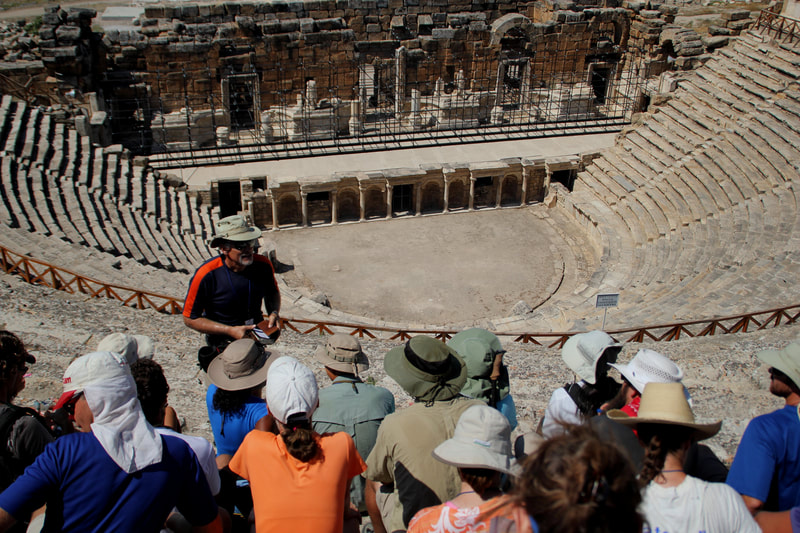 Theater at Hierapolis.
Laodicea was a wealthy city which minted their own coins.

After a major earthquake hit the region - it is attested that Laodicea refused to accept money from the Roman government to help rebuild. They wanted to do it themselves.

The one thing Laodicea was famous for was its awful water. The water needed to be piped in from a spring miles away and was full of minerals which made it taste bad. The water was good for nothing. It was neither hot - like Hierapolis - or cold - like Colossae. It was lukewarm and John wanted to spit it out of his mouth.

You can see in the photos below the clogged water pipes from the main fountain of Laodicea.

The water very quickly crusted the inside of the pipes and they had to continually replace or add new ones. 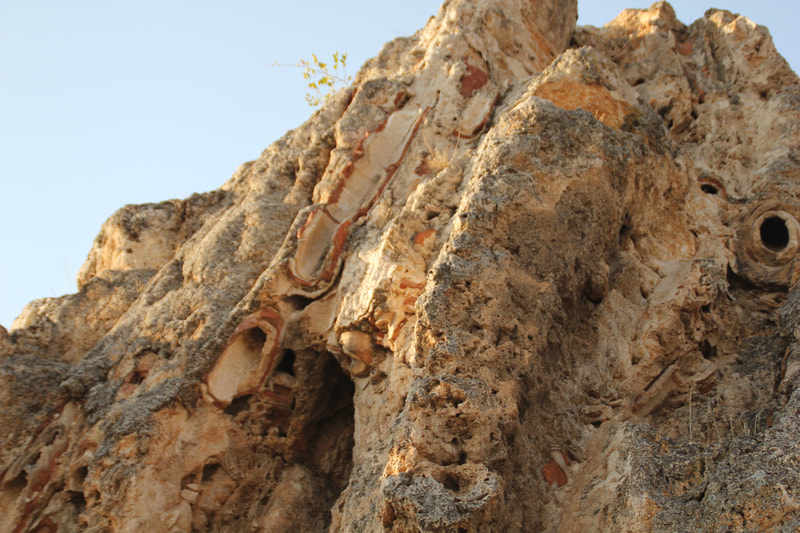 Laodicea was famous for their awful water. You can see the ancient fountain and how the pipes got clogged with minerals from the water source. 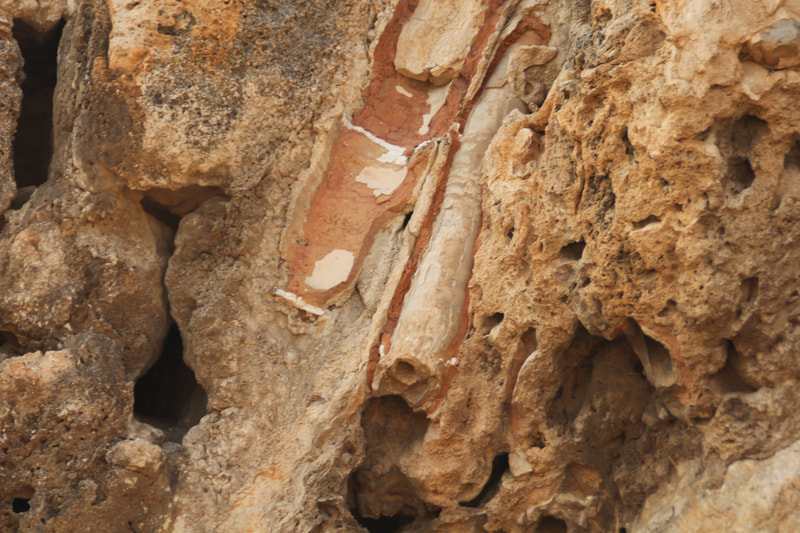 Laodicea water was full of minerals which made it taste bad and clogged up the pipes. 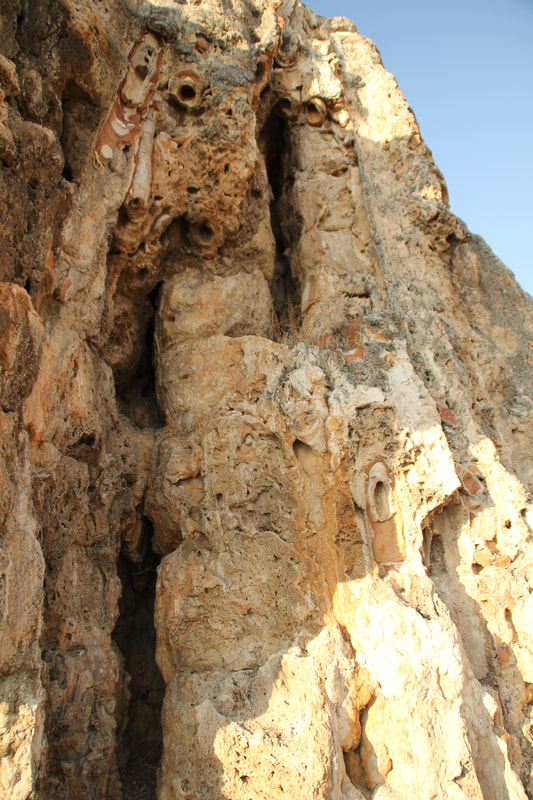 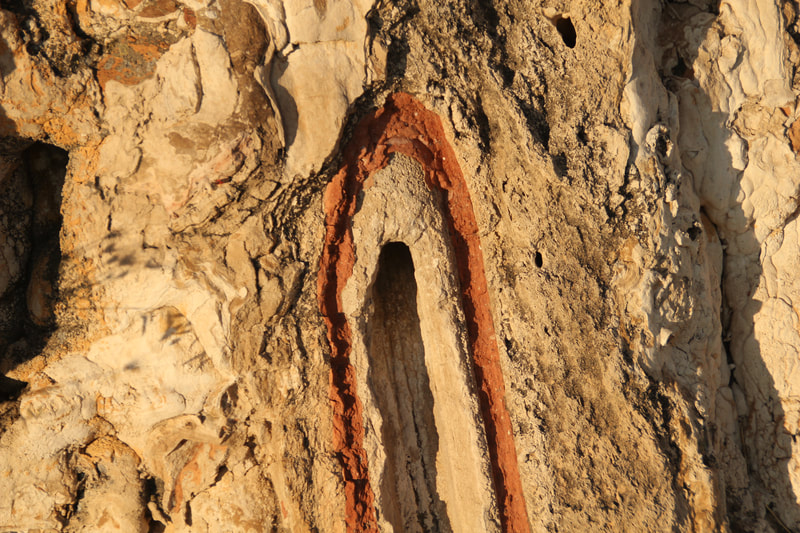 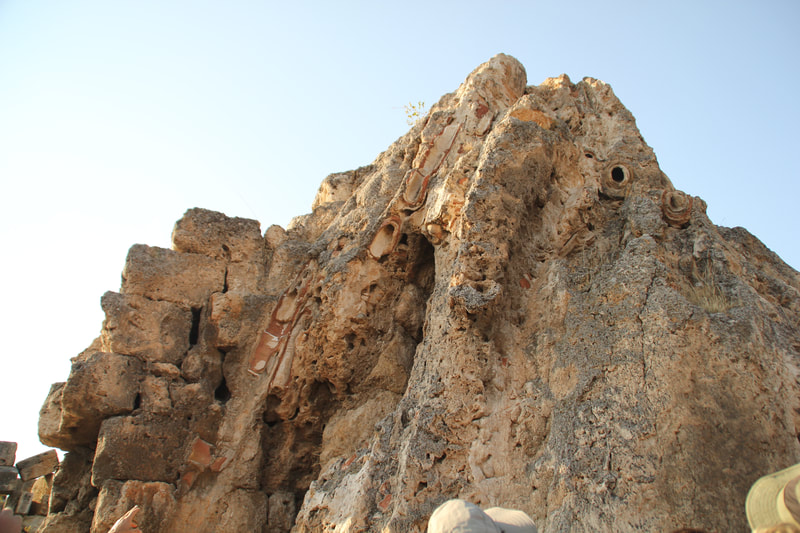 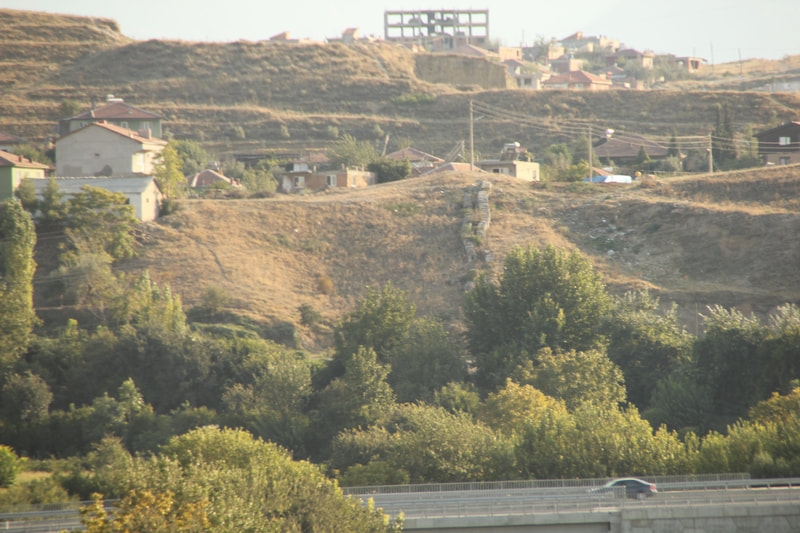 In the center of this photo you can see the base of the ancient water pipe that brought water into the city of Laodicea.
John, in Revelation, is using the metaphor of the water found in Laodicea vs. the water found in Hierapolis and Colossae.

He is speaking into the physical context that the people would understand, but is  also using the text of scripture to enhance his message. John weaves the message of obedience from Leviticus:

"Even the land was defiled; so I punished it for its sin, and the land vomited out its inhabitants"  (Lev. 18:25)

"Keep all my decrees and laws and follow them, so that the land where I am bringing you to live may not vomit you out" (Lev. 20:22).

Be good for something!!

The water at Laodicea?  Rotten. No good. "lukewarm" and ready to be spit out of your mouth.

I have commonly heard that "cold" is bad and that we should be "hot" for Jesus. I think this is taking the text out of the context of its original hearers.

Being "lukewarm" is bad.